Demo with your own data

Complete the form below and a representative for Sigma IQ will reach out to you to schedule a demo using your own data against our AI-powered, matching reconciliation engine. 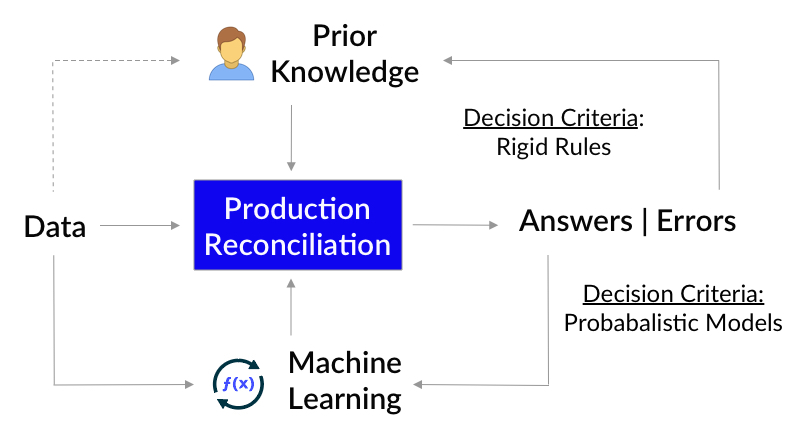 We are in the most exciting and frightening time, technologically, for Finance & Accounting (F&A) professionals since the advent of the profession’s transition from paper-based processes to computers almost 40 years ago. The rise of two important technological capabilities: Hosting/Cloud Computing and Artificial Intelligence-Machine Learning, will fundamentally transform F&A organizations and how work is accomplished by F&A professionals.

This white paper will focus on the distinction between Machine Learning technology and legacy rules-based automation technology - specifically with regards to account reconciliation - to help CFOs and F&A professionals make decisions within their own organizations. The question of Hosting vs On-Premises is a large enough topic to warrant a separate post.

Both legacy rules-based and machine learning software systems develop a set of “rules” for analyzing data sets in account reconciliation, but there are core differences in the approach.

One of the primary differences between Machine Learning and a Rules Based approach is “where is the knowledge coming from?”. In a rules based system, the knowledge comes from the human analysis, insight and experience of the builder of the rules. While valuable and nuanced, humans are inherently biased and limited in what they can analyze and build rules around.

Machine Learning based systems learn from the data itself. If the data is biased - incomplete, skewed, incorrect - the output will be biased but the development of the algorithm or “rules” is a non-biased algorithmic process driven by the data. Because the machine process is learning from the implicit and explicit relationships in the data, it can find rules in complex data sets much more quickly and accurately than a human can without implicit bias.

It is very challenging for a human based rules system to move from 1,000 to 1,001 rules due to the need to understand the impact of that one extra element or rule on the current 1,000. Not to mention that to get to 1,000 rules is challenging in and of itself. The impacts of deleting, modifying or adding a human based rule to fix a specific error might cause a cascade effect on the other rules.

Machine Learning models thrive on large amounts of data and are much more capable of creating and understanding complex decision criteria at scale.

The most effective image recognition models (like facial recognition) use close to one BILLION rules. Sigma IQ’s machine learning based account reconciliation model uses 10’s to 100’s of THOUSANDS of parameters to understand the data for matching depending on the complexity of the source data.

Even with help from statistical tools, humans can’t match that level of complexity at scale. A Machine Learning approach to the reconciliation problem really shines when trying to scale not only the amount of data - but the complexity of the data and need for associated rules for matching.

Learning SpeedRules based systems built by humans can only learn at the speed of humans. As errors or mis-matches are discovered, new rules have to be analyzed, created, tested and implemented while balancing the impact of all of the other rules already in place. This requires specific skills and time that your organization may or may not have (most don’t).

Reconciliation systems built on Machine Learning can learn in a more iterative way as the F&A staff accept or manually match items identified by the algorithm. The algorithm might update in real-time, but more likely in a regular batch process when enough data for a particular adjustment is warranted. One of the key benefits in this situation is that the entire algorithm can be refreshed with the new data with all considerations of interaction with the other rules, order of rule application and data relationships taken into account.

Rules Based Technologies Applied to F&A

The rules-based automation world we have lived in until now actually began in the late 1960’s with the development of the first enterprise software applications. However, enterprise applications did not gain significant momentum until the late 1980’s. The 1990’s represented the rapidly accelerating rate of adoption by industry of Enterprise Resource Planning (ERP), Human Resource Information System (HRIS), Supply Chain Management (SCM), and Business Intelligence (BI) applications. This time period also saw the increase in capabilities of Excel - Visual Basic, improved macro support and more advanced functions - which most F&A teams start with in account reconciliation automation.

All the above applications rely on technology based almost exclusively on rules. The notion behind rules is to provide unwavering consistency in business process. Rules may be conditional, Boolean, or mathematical.

Conditional rules may be expressed as, ‘If x, then y’

For example, when setting up a new supplier, most ERPs will allow the user to designate a default General Ledger (GL) account. Accordingly, whenever a transaction is entered for that supplier, the corresponding entry will be posted to the default GL account unless staff overwrites the default account by manually inputting a different account.

Boolean rules are either simply true or false

A simple example of a Boolean rule is the balancing function of the General Ledger journal entry module. Most systems prevent the posting of unbalanced journal entries. In this case, Boolean logic compares the credit total and debit total. If the two are different by even a penny, the user is unable to post the JE. In this example, the Boolean rule does not guarantee the JE is correct, only that it is balanced.

Conditional, Boolean, and mathematical rules share a common principle, namely rigidity. At the time these rigid rule methods were developed, the main objectives were consistency and efficiency. Solving a majority of transaction volume was still a tremendous benefit at the time, even if substantial human effort remained to address exceptions or transactions that did not fit neatly within the rule structure.

As has been the case with many technologies, the path to capable, production ready Machine Learning was uneven. Only within the last few years did four important elements finally converge: improved algorithm sophistication, cheaper and more powerful CPU processing, lower data storage costs, and the rise of more powerful computational programming languages.

The result being Machine Learning capabilities are finally up to the task of solving far more difficult and complex business problems. Machine Learning is distinct from rules-based methodologies in three important ways: algorithms, its ability to learn or adjust, and its flexibility to handle data variability or uncertainty.

The ability to incorporate multiple data fields or sources means there is more information available when the algorithm considers possible answers and can determine the best suited answer. Instead of relying on a yes or no for each rule, an algorithm basis it's match or no-match on probabilistic models. For example, a supplier master record is no longer limited to a single default GL account. Rather, if an invoice arrives with multiple lines, the system would assign the appropriate GL account to each line based on both supplier and line-level information without requiring the set-up of an exhaustive library.

Algorithms are designed to be general enough for each broader use case, which allow them to adjust and continue to learn as more data is consumed. Whether they learn "In-line" which means live or "off-line" which means in a batch process, really depends on the use case - but in both situations can be automated.

The learning that takes place is more than knowing how to treat a specific situation in each future recurrence. Rather, the system can leverage statistics, such that if a new situation is similar enough to prior ones (even if not exact), it can still effectively disposition an outcome.

Rules-based technologies lack any concept of implicit data relationships. Everything is discrete. When a piece of data arrives, the rule does not consider circumstance or context unless explicitly programmed beforehand. Instead it accepts the data and processes it according to the rule specification.

Machine Learning is both a consumer and creator of data. Instead of a rule dictating a specific outcome, Machine Learning uses prior and tangential data to evaluate the outcome most appropriate for the circumstances. The answer it generates also becomes additional input to the overall data population for future transactions.

In a Machine Learning environment, the role of F&A staff is significantly different than in a rules-based environment. In today’s rules-based organizations, F&A staff spends the vast majority of its time and effort on three activities: generating or inputting data, finding problems, and fixing problems.

In tomorrow’s Machine Learning F&A organization, staff will instead monitor and supervise processes, statistically validate activities of the systems, and greatly reduce their transaction-related effort to a small proportion of their time and effort. They will repurpose those regained hours to focus on higher-level analytical work directly impactful to broader strategic goals.

Sign up for the Sigma IQ - CFO Brief and let us help you advance your knowledge and career by delivering articles, insights, and other resources geared towards Finance & Accounting teams.